Emerging as a sleeping giant in Etowah County is one of the first settlements now known as Rainbow City. Settled in the early 1800’s it is now one of the fastest growing areas in the county with many new business, industries, and homes springing up along its major thoroughfares. Rainbow City extends from the city of Gadsden on the north to the county line on the south and east to the Coosa River. 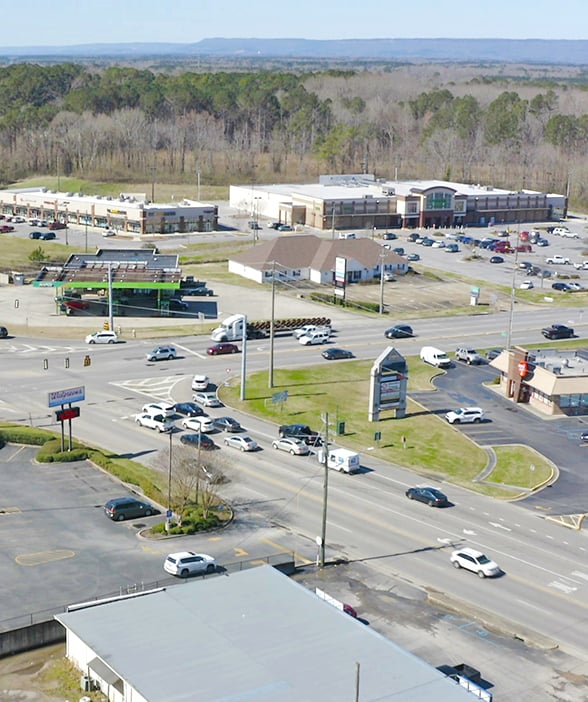 Rainbow City was named after U.S. Highway 411, called Rainbow Drive, which runs through the middle of our city. Some of our older citizens say it was named after Alabama’s Rainbow Division that fought in World War I.

Hernando DeSoto’s troops were the first visitors to the area in 1540 and today a bridge now stands where the Pensacola Trading Path crossed the Coosa River. A paved highway now traces the trail that was cut from Nashville to Horseshoe Bend by Andrew “Old Hickory” Jackson on his way to fight the Creek Indians in a battle known today as the Battle of Horseshoe Bend.

Known in the beginning as Coosa Bend, it was later called Morgan’s Cross Road. It was located at the intersection of the Gadsden-Ashville Road and Gilbert’s Ferry Road. The land was passed from Edmond Jones to his son Clayton, who never married. When he died, the land passed to his sister, Luvica Morgan, who was also the wife of William Morgan.

Knowing the importance of education, John Sheffield Jones, the grandson of Edmond Jones, an original settler, donated $1,000 and the land for the construction of the first John S. Jones Elementary School. Later, John S. Jones burned to the ground and a new elementary school was built and serves the Rainbow City area today. Rainbow Middle School and the Westbrook Christian School, also serve the Rainbow City students today.

The former mayor, Sue L. Glidewell, one of Alabama’s first women mayors, served as mayor for 24 years. She retired from the mayor’s office in 2004. 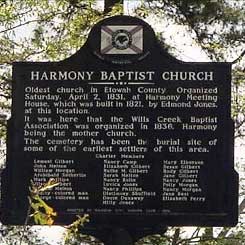 We have the oldest church in Etowah County called Old Harmony Baptist Church. On Saturday, April 2, 1831 the church was organized at the Harmony Meeting House. Thomas Morgan served as the first pastor. A few years later, the first Baptist association was organized by Rev. John Gilliland. Harmony was one of the first five members in the association.

The adjoining cemetery, Old Harmony Cemetery, has been declared a historic landmark because of its unique features. This cemetery has black and white slaves buried in it, Indians, single and double interment, and most of the tombstones have poems and writings on them. They say one man is buried crosswise because he lived crosswise with the world. You can visit Old Harmony Cemetery online.

Gadsden Water Works and Sewer Board